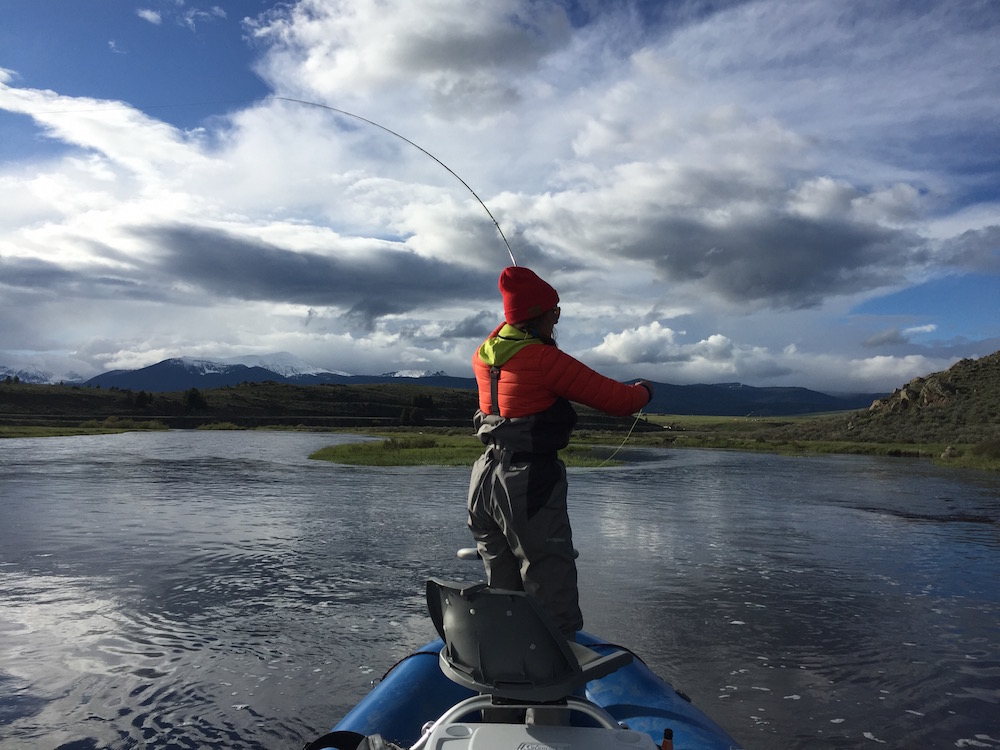 If you’re fishing in a river and you’re not catching fish or even getting a nibble, you start thinking, “Are there even any fish in this goddamn river?” or “Maybe they’re not feeding right now,” or “it’s probably my fly pattern.”

Let me tell you right now that there are fish in that river, they are feeding right now, and yeah, it might be your fly pattern. But what can you do other than fall to your knees and pray to the fish gods to improve your odds of hooking into that trout mouth?

We all want that perfectly placed cast directly upstream of a feeding fish. But guess what? It’s not gonna happen every time. Wind, rain, obstacles in your back cast and cold hands can all contribute to a lousy cast. But get over it. Sometimes that imperfect cast is the one that ends up nabbing that sweet slab. Fish aren’t looking for perfect casts, they’re looking for a natural insect to eat which can be achieved with many different types of casts, so stop worrying and get your fly in the water.

The more false casts you have, the less time your fly is in the water. Give yourself some better odds and stop with the eight or ten false casts. You’ll be more likely to catch a fish and less likely to snag that pine that been innocently waiting for you to screw up.

Lastly, fish can see you casting over them again and again. On a crystal clear stream, you could spook all the fish in your pool if you throw half a dozen false casts over them before you even put your fly in the water. Work on getting down to one or two (or zero) false casts before presenting the fly on the water.

How many times have you cast to the same spot hoping that on the last cast, Methuselah, will magically materialize out from under that rock and take your fly? Sorry, but this dream isn’t going to come true.

Casting over and over again to the same spot and not moving on is the least efficient way of fishing a river. Give yourself three good casts in a spot, then move on. If a fish doesn’t hit your fly in three casts, it probably won’t happen at all.

Be Patient and Watch the Water

When I get to a new fishing spot, all I want to do is get my fly over a rising fish as soon as possible. But sometimes, my eagerness ends up biting me in the ass. Being observant and patient when you first arrive at a fishing destination can be the difference between catching fish or the big golden goose egg.

Sit down on the bank and watch what’s going on on top of the water. Are there bugs hatching? What kind of bugs? What size? What color? Where are the fish eating? What’s their feeding rhythm like?

Once you get to know what’s happening in this environment, it becomes a lot easier to mimic nature. You’ll know what fly to tie on, where to cast and how long to let your fly drift.

Consistently fishing with a dry fly when there’s nothing hatching is kinda like sharing your girlfriend’s squeaky twin bed when you’re visiting her parents: you’re not gonna get any action.

If you don’t see any fish eating dry flies, that probably is a good indicator that you should switch to nymphs or at least hang a dropper underneath that dry fly.

If you’re feeling stubborn and really are committed to fishing with a dry fly, relax on the bank for a while until you start to see some bugs flying around or go to the local watering hole till the evening hatch emerges.

Eyes on the Prize

When you’re in a particularly insane hatch and the water is boiling with rising fish you figure you can just toss your fly out with the rest of the naturals and hope that a fish finds it appealing. Nope, not quite. When there are thousands of bugs for a fish to choose from, they can afford to be as picky as they like.

Sometimes a fish will be even less likely to choose your fly over the bajillion natural bugs available. Instead of just tossing your fly out there, try targeting just one rising fish and floating it past him several times. this will lower the random chaos and increase your odds of that fish choosing your fly.

In the end, fishing can be frustrating. There are times when it feels like you’re doing everything right, but nothing’s happening. That, my friends, is when you break out the flask on the river bank and chalk it up to just damn good casting practice.

Want to make sure you’re able to keep catching all season long? Get the best flies, gear and advice sent to your door every month by signing up for Postfly now!