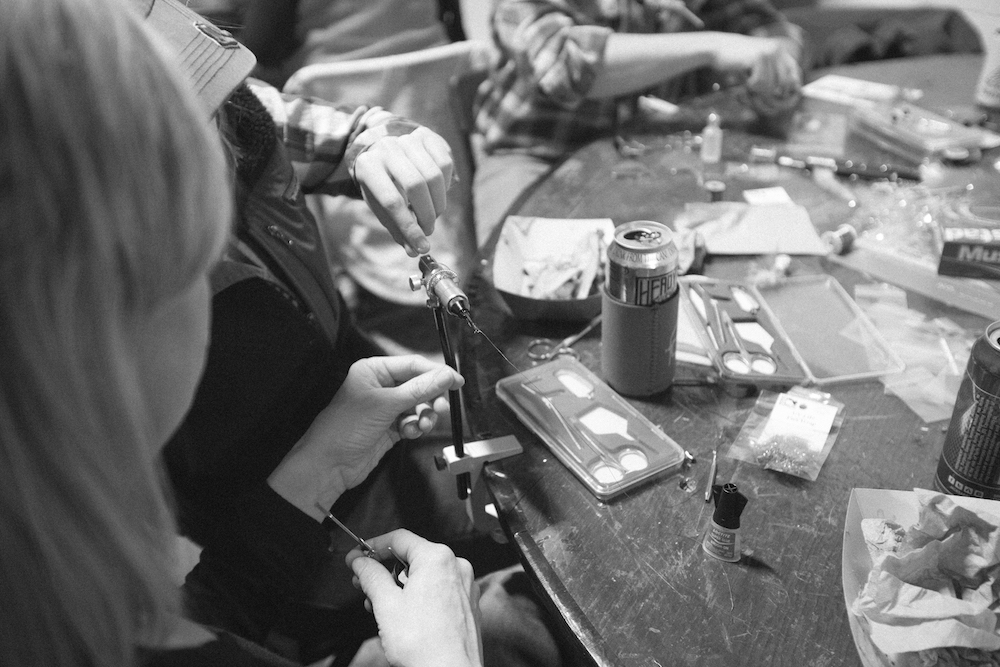 Living in New England for a fly fisherman is very different from being out West. All the time I see cool fly fishing art shows, fly fishing guide seminars, fly tying nights and all sorts of cool events popping up out West. While there’s a giant fly fishing community in the land of A River Runs Through It, out here in New England, it’s nearly non-existant. That’s why we were thrilled to host our first Vise Nite, part of Postfly’s new Feathers and Foam Tour and invite Tribe Members and friends to come to Postfly HQ and tie some flies with us.

Not only where all of our tables lined with fly tying materials, tools and vises, but we also had a table full of free beer, courtesy of  Lagunitas and Jack’s Abby and a table full of tacos. Mmmhmmm tacos. Since this is an office that knows how to have fun, we also had an assortment of games to play if you needed to rest your fingers from tying a tricky nymph.

To help with the ambiance we even brought in a musician to play classic rock sounds, because what’s better than that while tying flies all night long and hanging out with friends? The only thing better than the free beer were the new Postfly Tribe Member coozies that arrived the day before the event. Perfect for keeping tall boys from freezing your hands on a wintry night.

Watch A Highlight Reel Of Postfly’s Vise Nite Below!

Because we love our Tribe Members, we gave everyone who came a raffle ticket and gave away a handful of Postfly swag like beanies, hats and gift subscriptions. Liz Fagan (below, left) and Stella Gearty (below, right) both one a free Centerfold Beanie to warm their noggins on the river all winter long.

Get a Centerfold Beanie for yourself right now, or give it as a gift this holiday.

Some Tribe Members even drove down from Maine, like the one below from Sebago Lake. We were pumped when he also won some Postfly swag to make the long drive down more than worth it. Although we had fly tying, beer and tacos, so, it was probably worth it already.

Postfly’s Ben Duchesney (below) sat down behind the vise and helped out a few Tribe Members tie their first fly. We had plenty of fly tying kits scattered throughout the tables to make sure that even beginner tyers could whip up some fish-catching patterns. Even people that had never even though to tie a fly before were trying their hand with a bobbin and were turning out patterns left and right.

We’re going to try and throw a Tribe Member meet up about once a month, so stay tuned for the next one. We’re still recovering from the wild night last week, so January’s meet up will probably be pretty casual, but get ready to throw down some flies for February’s, that plan is already looking pretty cool.

Want to Join The Tribe of thousands of fly anglers all around the country just like you? Sign up for Postfly now.