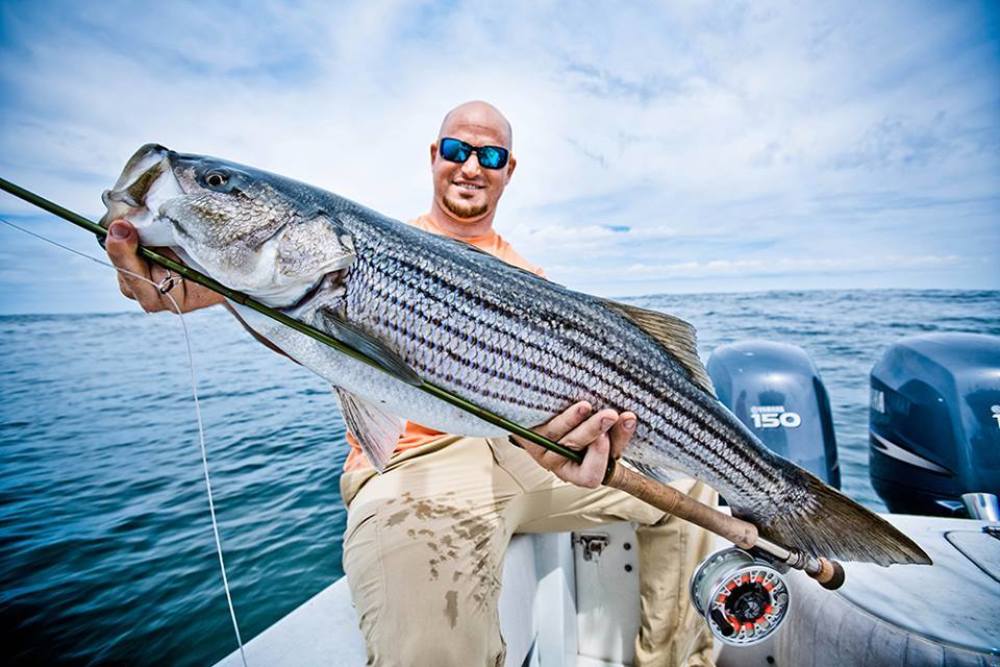 If you’re looking to hire a fly fishing and light tackle guide who knows the ins and outs of Boston Harbor, Captain Josh Farkes of Light N Fly is your go-to guy. Josh was born and raised in Boston and, after a minor league baseball career, returned to his hometown to run charters for Striped Bass, Bluefish, and False Albacore. The other morning we met Josh at Liberty Wharf in the Seaport around 5AM, fished for four hours, got into multiple schools of stripers feeding on top, and before you know we were back downtown for work before 9AM. Along with early morning trips, Captain Josh is available to pick up anglers after work for an evening of fishing, along with more traditional charters as well. Find our video and Q&A with him below, and enjoy.

JH: Where are you from, and when did you start fishing?

JF: I was born and raised in downtown Boston and learned to fish on the lakes, rivers, and ponds in New Hampshire in the summers as a little kid with my 3 brothers.  As a family, we took one trip to Florida each year and would go out on a charter boat together in Miami.  We would catch mahi mahi, king fish, barracudas, amberjacks, and sharks – that’s when I really got hooked and can remember looking forward to that chance to fish with my family each year for all those different species.  In 1998 I fished the Boston Harbor with a friend of mine for the first time and he put me on my first striped bass and bluefish that summer.  I couldn’t believe the fishery that was just a few miles from where I had lived my whole life.  I became obsessed with fishing that summer.

JH: What’s your favorite thing about fishing in Boston Harbor?

JF:  After spending the day catching striped bass it is pretty cool to drop my clients off at one of the many wharfs right downtown in the Seaport area of Boston.  As we approach the drop-off spot, the airplanes are buzzing in and out overhead at Logan Airport, the city skyline is right in front of us and its almost as if no one on the boat can believe the incredible fishing that is literally right in the middle of such a great city like Boston.  And then, of course, I also like catching a 40+ inch striped bass on the fly as well!

JF: I played some professional baseball for a few seasons after graduating from college.  I didn’t make it nearly as far as I had hoped but it was pretty darn cool to spend 10-12 hours each day at the field working on my game, hanging with my teammates in the clubhouse, and I used to love to talk about hitting with the guys.  Hitting a baseball is one of those topics that you are never going to totally figure out – so each day you are constantly trying to learn and understand it better, its a never ending discussion…its actually very similar to fishing in that there is always more to learn and just when you think you are starting to figure it out – you discover a whole new approach that you can quickly become fascinated by.

JH: Favorite beverage after a long day on the water?

JF: A nice cold beer while I clean the boat and get ready to head back out there again tomorrow!