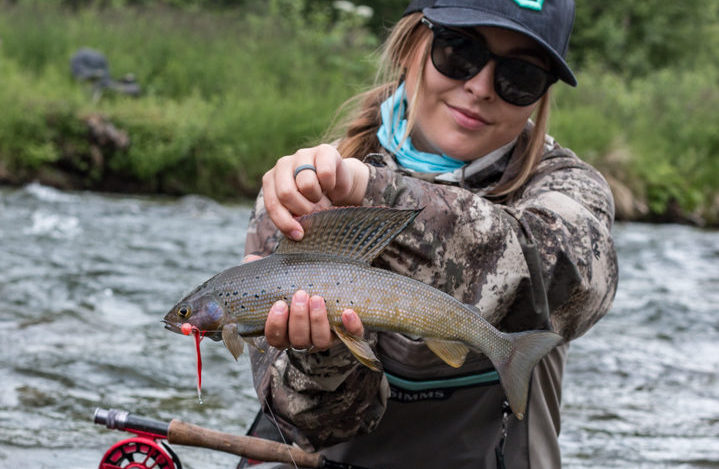 Hey guys, Tessa Shetter here! Being a lifelong Alaskan resident, I do have to say I feel very lucky to live in such a beautiful state that is home to such beautiful fish.

To my understanding, fly-fishing in Alaska is very different compared to fly-fishing in the lower 48 when it comes to style, technique, and equipment.

To those who have not had the chance to fish in the last frontier, here’s a little overview of what it’s like (in my perspective) when it comes to locations, gear, and flies!

First off, Alaska is huge. I’m a 20-year-old college student, so unfortunately, I haven’t had the chance to travel too far to fish yet. BUT – the locations I do get to fish could keep me busy for the rest of my life.

The geographical term for this area is “Southcentral Alaska”, which includes Anchorage, Palmer, Wasilla, Talkeetna, Willow, and the Peninsula (Kenai, Soldotna, etc.). I’ve fished in every town I just listed, and have had success in each.

To give some perspective, Talkeetna and Kenai are 267 miles (or 5 hours) apart, and are in the same region of Alaska.

Alaska is definitely home to some big ole fish. The size of your set up depends on the species you are targeting.

For smaller grayling and rainbow trout, I will range anywhere between a 4wt and 6wt set up.

For salmon and bigger rainbows/steelhead, I recommend between 7wt and 10wt set ups. Typically, we don’t use tippet. Rather, we taper our leader line the length of our rods with 25lb to 15lb to 12lb.

SPRING: Waters start to thaw in the beginning of April, however, this is when trout spawn, and Alaska regulations do not allow us to fish in certain areas at this time. In the areas we can fish, we use Dolly Llamas, leech patterns, and woolly buggers. Dolly llamas are the holy grail of Alaskan flies, because this fly can be used on any species by just changing the color variation. So, when waters thaw, we use fleshy and washed out colors of dolly llamas to represent old salmon flesh being released from ice (gross but also cool).

SUMMER: King salmon begin showing up in May, which means it’s time to bust out the heavy weight rods and brightly colored flies. King salmon populations have decreased rapidly over the years, so the regulations are very strict when fishing for kings. We only ever catch and release kings, and use fuchsia and chartreuse colored dolly llamas and intruders (Basically large leech patterns. The Postfly Salmon Sub Box is PERFECT for AK!).

June is when all the rivers are open to trout fishing, and when the fun really begins. The kings have begun to swim upstream to prepare to spawn, and the trout have followed along with them. At this time, we still use flesh colored flies and leech flies for trout. The sockeye salmon make their way in two separate runs during June and July. These salmon are restricted to Russian River flies, meaning the hook gap cannot be larger than 3/8″. Top water dry flies can be used from this time on to catch beautiful grayling as well, focusing on bigger mosquito patterns.

FALL: Fall in Alaska is probably my favorite time to fly-fish. By the end of July and into August, the king salmon are spawning which is the perfect time to use painted bead patterns. (YES Fall begins in August in AK). Trout and Dolly Varden LOVE to eat salmon roe. Kory and I have yet to beat our record day of 112 fish by using a variation of painted bead patterns in August. This is also the time when the chum, humpy, and silver salmon begin to arrive, and like kings, they also love chasing big, bright colored flies. September and October are great months to continue fishing beads behind salmon, and swing streamers in deeper waters.

WINTER: Alaskan winters are long and cold. Our first snowfall is usually around Halloween and doesn’t thaw until late April. Flesh colored flies and beads can be used throughout the rest of the year into winter. Those who brave the cold usually end up with chunky rainbow trout ranging between 25 and 30 inches. By January, most of the waters are too frozen to fly-fish on. The latest (or I guess earliest) into the season we have ever fished was January 6th, and it was 4 degrees F!

Like I said, this is just my take on fly-fishing in Alaska. This is also a VERY condensed outline of tips. I’ve still got a lot of learning and exploring to do. I hope this gives you guys an idea of what it’s like to fish in this beautiful state.

If you guys have any questions or would like to hear more about Alaskan fishing, please feel free to reach out to me via Instagram, and don’t forget to check out my IG page for a Postfly discount!