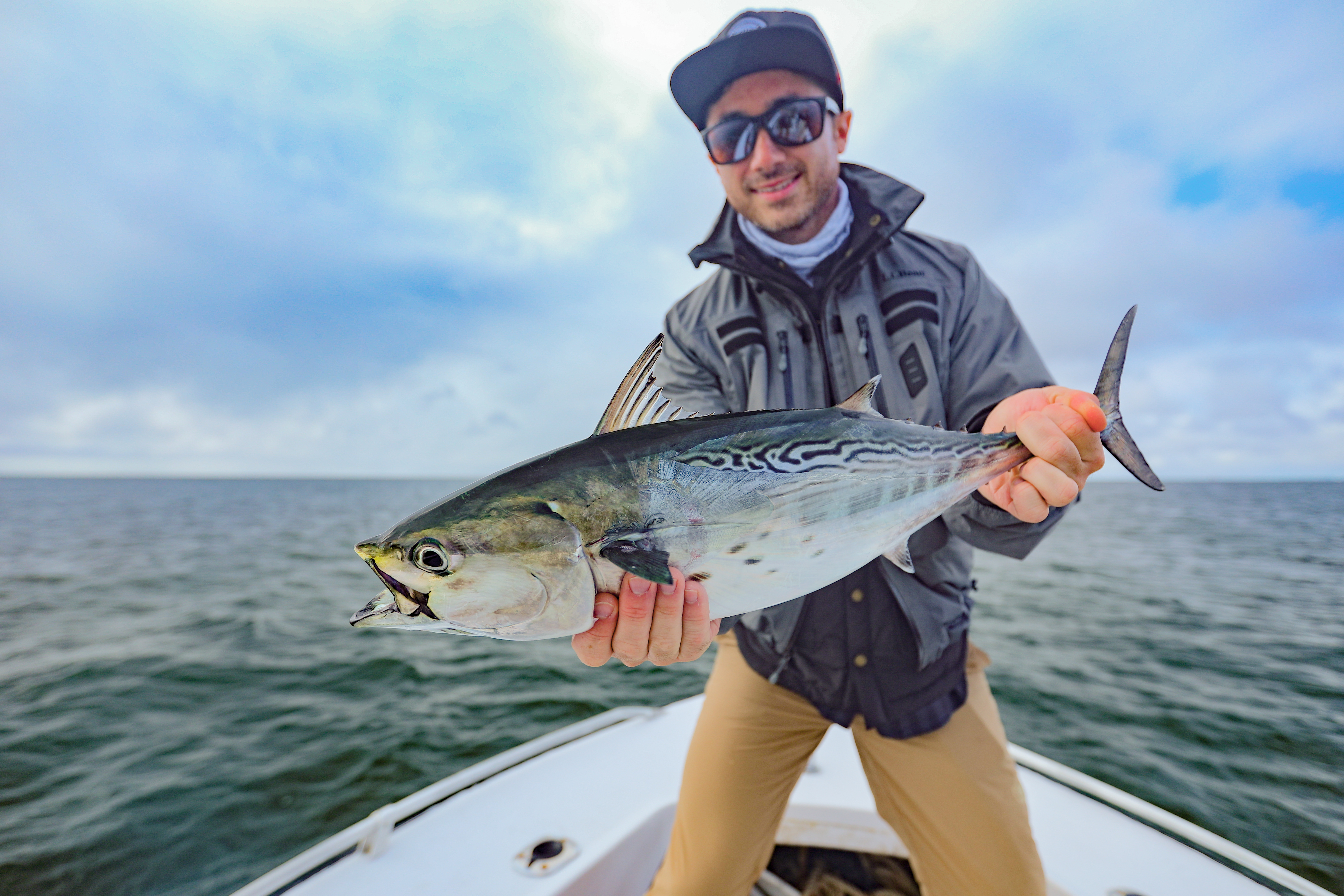 A few months ago, when the Albies were still feeding south of Cape Cod. We had the epic opportunity to take one of our Tribe Members, Daniel Manzano, out fishing. Daniel is a part of the widely known band, Boyce Avenue and travels the world performing when he’s not creating new music with the band, you can find him in Florida out fishing with his family. After the trip, we sat down with Dan to talk about the trip and how fly fishing helps him balance out the crazy life of a touring musician.

PF: Tell us a little about yourself.

Daniel: My name is Daniel Manzano. I’m happily married and a father of four kids, I live in Sarasota, Florida, and I’m ⅓ of the band Boyce Avenue (with my two other brothers, Alejandro and Fabian). We run a successful YouTube channel and tour the world playing music (and in my case, fishing as well).

PF: How did you get your start in fly fishing?

Daniel: One of our crew members is an avid fly fisher in his home waters of Pennsylvania. I had gotten into spin fishing a few years ago but had never tried fly fishing, and while on tour in 2016 he convinced me to give it a try. We went to a fly shop, I tried out a few fly rods, and I was hooked. I bought a 5wt setup on the spot and have been obsessed ever since.

PF: What is your favorite aspect of fly fishing?

Daniel: I love the art and craft and style of it. There is an elegance to fly fishing that appeals to me. It requires not only skill and physical force but also attention to detail and patience.

PF: So you joined us on a fly fishing trip chasing False Albacore. What was it like fishing with the Postfly crew?

Daniel: The trip exceeded my expectations in every regard. Everyone was so nice and accommodating and down to earth. Getting to hang out at Postfly HQ afterward was a huge bonus. I highly recommend that anyone in the area pop in for a visit. What you guys are doing is spectacular. It’s not just a business, it’s a family and a community, and I really respect that.

PF: What was it like hooking into an Albie on the fly for the first time?

Daniel: It was awesome! I absolutely did not expect the fight to be so intense. It was a huge rush. You have to constantly stay on them, and they don’t go down without a fight. Whether it’s the deep dives, or taking you well into your backing, or charging at the boat, they definitely keep you on your toes and tire you out.

PF: Any advice for someone about to go on their first Albie trip?

Daniel: I suppose I would recommend two things:

Calm down. When the day first started I was really nervous and the whole experience was very chaotic.  Albies don’t always stick around for long, I learned the hard way. They’ll be smashing the surface one second, then gone the next. This creates a sense of urgency and nervous energy that, at least for me, wrought havoc on my casting. Of course, it also didn’t help that a mere couple days before, I had sliced up my stripping hand thumb something fierce with a razor on my fly tying bench, and had to acclimate to that. Haha. But all the same, the more I relaxed, the more I was able to put some efficient and good casts out there. It’s proved way more effective, in my case, to take a deep breath, take my time, and layout one good cast (even if not a long one or the “perfect” one), than it was to get the cast out quickly but have it tangle or be trash and then have to re-do it (sometimes two or three times).

Work the edges. I found I had just as much success placing the fly on the periphery of the surface activity as I did putting it in the middle of the action. It is very tempting to try to place the fly right amidst all the surface activity, in the thick of it. And while I’m sure that works plenty and may even be ideal, if the frenzy of activity is a bit of a reach as far as comfortable casting distance is concerned, I would recommend settling for a good cast on the edge of the surface activity. I found there were a surprising number of fish emerging (sometimes seemingly out of nowhere) to slash at a readily noticeable baitfish on the periphery. These fish are fast and aggressive, and I’m guessing that some of them are keen to take advantage of a lone baitfish on the outskirts, all to themselves. The takeaway point for me was this: when approaching a frenzy of surface activity, just because you don’t see splashing on the periphery doesn’t mean the fish aren’t there. Go for the easy cast if you have to, and hope for the best!

PF: How to Albies stack up against the other fish you have hooked into on the fly?

Daniel: They’re at the top of the list for me so far! My 8 wt has never bent like that before. I’ve caught snook, golden dorado, trout, salmon, etc., and the albies I hooked into had me the most exhausted of any fish I’ve ever hooked with a fly rod. They fight like mad. I’ve had some close encounters with tarpon, but have yet to hook one. I’m sure when I do that that will be an eye-opener. But for now, the albies are on top. And, frankly, if we’re talking pound-for-pound, short of fighting a yellowfin tuna or something along those lines, I’m not sure I’ll get that kind of fight again anytime soon!

PF: What is your favorite part of being a Postfly Tribe member?

Daniel: Constantly learning and evolving. If you aren’t learning, you’re dying. And it seems there is always something new to learn when you’re a part of the Tribe!

Dan Zazworsky’s passion is sharing his love of fly fishing with anyone that will listen, read or watch. You can find him exploring new waters every day while chasing any fish that will eat a fly!

One thought on “On the Rocks with Daniel Manzano”