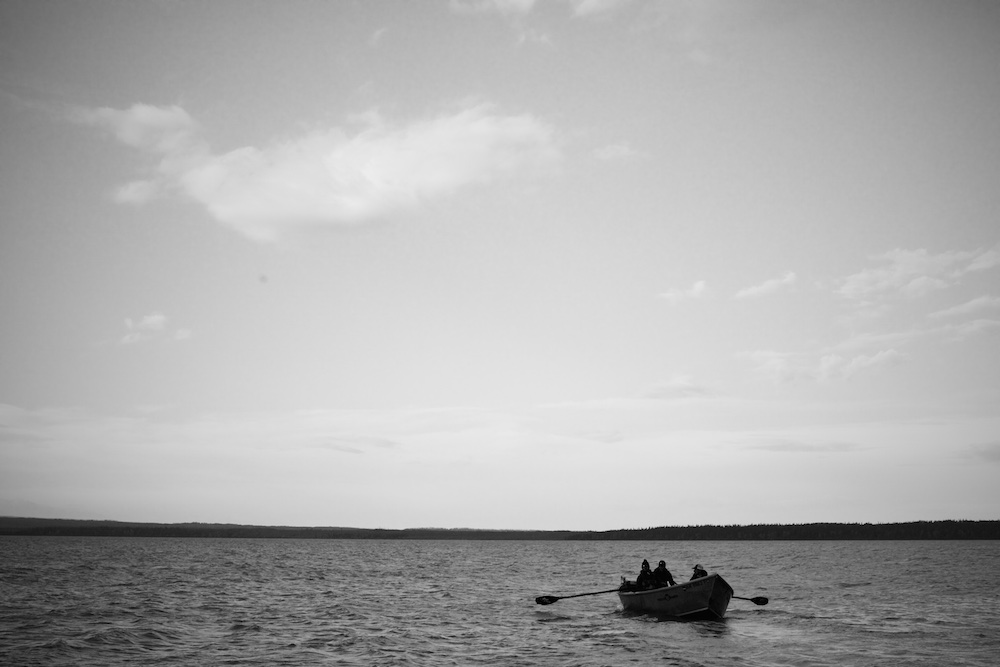 Recently we told you “How To Make Fly Fishing Without A Boat Worth The Wade,” because the majority of what we do around here, and what many of our Tribe Members do, is fish on foot. That doesn’t mean we’re not totally obsessed with boats too. In fact, I’m writing a book on fly fishing from a boat (kayaks, specifically) and we’re dying to get a boat for the office; we need one…for “research and development.”

So for all those lucky anglers that get to fish from a beautiful vessel that can magically escort you on the surface of a liquid to your fishing destination, whether it’s your own or a buddy’s, here are a few tips to help you catch more fish. Just because you have a boat doesn’t mean that you know how to use it to its fullest potential. Also, if you do have a boat, can we come next time?

Balancing in a boat and fly fishing at the same time is easy once you give up on your precious notions of what “stable” really means. I’ve been known to stand on top of a cooler that’s sitting on top of a kayak or a standup paddleboard, all while casting to a cruising striper on the flats in a light chop. How can I do that? Well I don’t try it while pounding beers, (that’s later), but also, I just let go to the uneasiness, embrace the chaos.

Instead of trying to adjust your body position to counter the movement of the boat beneath you, just let your upper body go quiet and keep your hips loose to move as they need. We have a saying in the whitewater world, “tight hips, sink ships.” What does that even mean? If you’re trying to fight the forces of the water beneath you and the boat all of a sudden moves in a way you didn’t anticipate, well you’re going for a swim. Keeping your lower body loose and your upper body quiet will not only give you the core strength of a belly dancer, it’ll also keep you dry.

When it comes to landing fish, a boat is sometimes the trickiest position to be in. Other times, a boat can make landing fish the easiest part about catching one. Really, all that depends on your net and the angler wielding it. There are two types of net people in this world, those that expertly scoop fish into the net with such grace and agility you let out a sigh of relief whenever they pick up the net.

The other person is the one that hacks and stabs in the mostly general position of the fish, maybe netting it, maybe scaring the living hell out of it and making it swim off again with a burst of adrenaline, or maybe even just breaking the leader with the net and solving the need for a net in the first place. No matter the type of netter you are, always be sure to net your friend’s fish so that they will reciprocate and make life a little easier on the water.

Unless your buddy is the second type of netter, in which case there’s a way you can net your fish alone. You can either tuck the handle of a big net under your armpit and use leverage to control the net, or you can stick half of the hoop in the water and hope there’s enough clearance for the fish to float right into the net. Good luck.

An Anchor Is Not An Option, It’s A Must

Whether you see a pod of working fish or you just want to better dissect a juicy-looking hole, an anchor or stakeout pole will turn your boat into an outpost, a home base where you can store all your gear and snacks and then move when you have to, but also stay and fish if you want. It also lets you fish my favorite way, wading from your boat and using it like a giant, floating flybox. Speaking of which…

Yes, You Can Still Wade

Like I said, my favorite way to fish a flat is to paddle out in my kayak at a dropping tide, anchor up and ditch all my stuff except the essentials, and then wade the entire flat for the next few hours on foot. There are a lot of stuffy purists out there that might say you have to do one of the other in order to classify what you’re doing or how you’re catching fish, but I say, why classify fun?

Fishing on foot with a boat, either on a leash connected to your belt if it’s a small boat, or anchored up on the same flat, allows you the best of both worlds. You’re not limited to that single spot or section, you don’t have to carry all of your gear and you can still stop your feet any time you want to better fish one section or school.

If you are fishing in your buddies boat with a few anglers, don’t forget to read up on “How To Fish In A Crowded Boat And Not Get Hooked In The Face.”

Want to keep your flybox full of flies so you can catch fish the next time you push off of dry land? Subscribe to Postfly today to make sure you always have a fly to tie on.