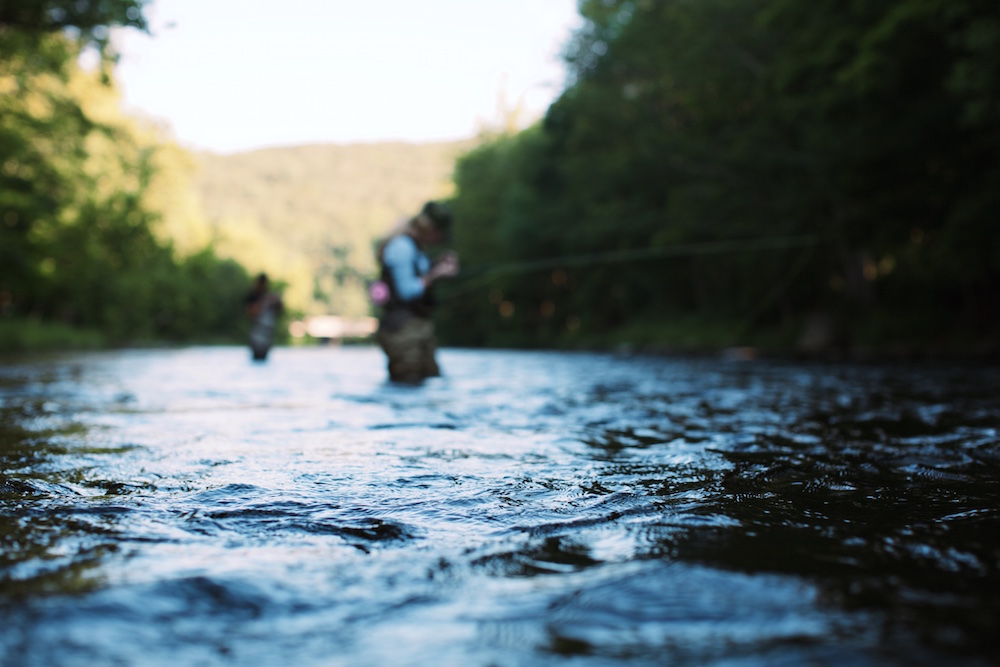 The way you live your life, survive the work week and react to the conditions on the water say a lot about you and can make you fall into certain categories. Whether you’re more like a bass or a tarpon isn’t up to us, but who you are.

This is a serious thing to consider. What if you’ve been living your whole life thinking you’re like a regal rainbow trout only to find out that you’re really more like a feral musky that EATS rainbow trout for breakfast, lunch and dinner. That could create quite the existential crisis. Proceed with caution, we’re not responsible for identifying the species you truly belong to, that’s all you.

You consider yourself a purist, maybe old school. You love fishing fiberglass rods and you either own, or one day plan to own a bamboo rod (or maybe even a few). Rod building is in your near future, and you tie flies as quickly as you talk about the latest fly fishing book you just read that we “just have to read.”

Other signs you’re a rainbow trout: you’re maybe just a little snobby (and hearing that just made you turn your nose up a little bit), you’re a picky eater, you think you’re downright gorgeous, but also very shy. If you own tweed (yes, even if you don’t wear it), think saltwater fly fishing is “not real fly fishing” and only fish dry flies, you’re probably a rainbow.

You go with the flow and you don’t really rush into anything, not unless you’re really hungry or really pissed off. Nothing really bothers you, you can live pretty much anywhere and you’re happy to eat pretty much anything that comes within sight. You’re usually an open book, but every once in a while you like to drive friends crazy by acting like an enigma, just because.

Other signs you’re a largemouth bass: You like country music, domestic beer, and pickup trucks, but anytime you get near Mexico your ego doubles in size. If you’re crazy busy during the warm summer month, but totally ghost out on your friends in the winter, then you’re probably a largemouth.

You’re a total badass and people maybe fear you just a little bit, but you don’t shout about it or even address it. Yes, you could show off your coolness, but you’re off doing your own thing. You’re “misunderstood,” “different,” and “walk your own path,” but haven’t given any thought to what those people are really even talking about.

Other signs you’re a musky: You have tattoos covering your entire body, you listen to metal, and you know the rest of the world is wrong on a lot of things, but you’re too busy loving life to let them know. If you like hiding in the shadows at parties, or don’t go to parties at all and go fishing all night instead, you’re probably a ‘ski.

You’re the damn king (or queen) and everyone knows it, including you. You do whatever the hell you want, when you want and you’re not afraid to break a few hearts along the way. You might be tall, big or lanky, but you know how to move your body and use your muscles to be more athletic than everyone around you.

Other signs you’re a tarpon: You have a sweet mustache, you prefer warm waters and palm trees, and you often travel in big groups of friends or family. If you occasionally get drunk on (tequila) worms and act like a damn fool, but it’s ok because you’re so great that everyone still loves following you around anyways, you’re probably a silver king. Or if you can backflip.

Life is good. Everything is great all the time, you’re glass half full is practically overflowing, you’re the life of the party, even when you don’t actually know what you’re doing, or maybe even where you are. You take the rough times in stride and you’re willing to have some fun even when no one else is around.

Other signs you’re a kibbie: You love pop music, you’ve ever taken a selfie (or if you own a selfie stick), you like to believe that you’re really tough and strong, and could handle anything, but even if you can’t you at least know how to look good doing it. If you’ve ever considered what life would be like living as a golden retriever, you’re probably a kibbie. #KibbieNation

No one knows what the hell is going through your head. You’re a complete and total mystery and even your closest friends who say they know what you’re doing, deep down, don’t have even the slightest clue. You’ve had some really serious relationships but every one has ended with a broken heart, theirs, not yours, and maybe just a few totally obsessed stalkers.

Other signs you’re a permit: You’re maybe a little odd looking, but like, in a cool way, maybe have an affinity for aliens, and you love tropical climates and Kalik beer and you’re way more athletic than you look. If you think Kenny Chesney has life figured out, but people would never expect you to even like tropical music, you’re probably be a permit.

Did you just realize you just read an entire blog post on what type of fish you might be and now you’re finally ready to admit that you have a complete and total obsession with fly fishing? Join the Postfly Tribe today and become a part of this crazy world we call the fly fishing community.

One thought on “Serious Question: What Kind Of Fish Are You?”