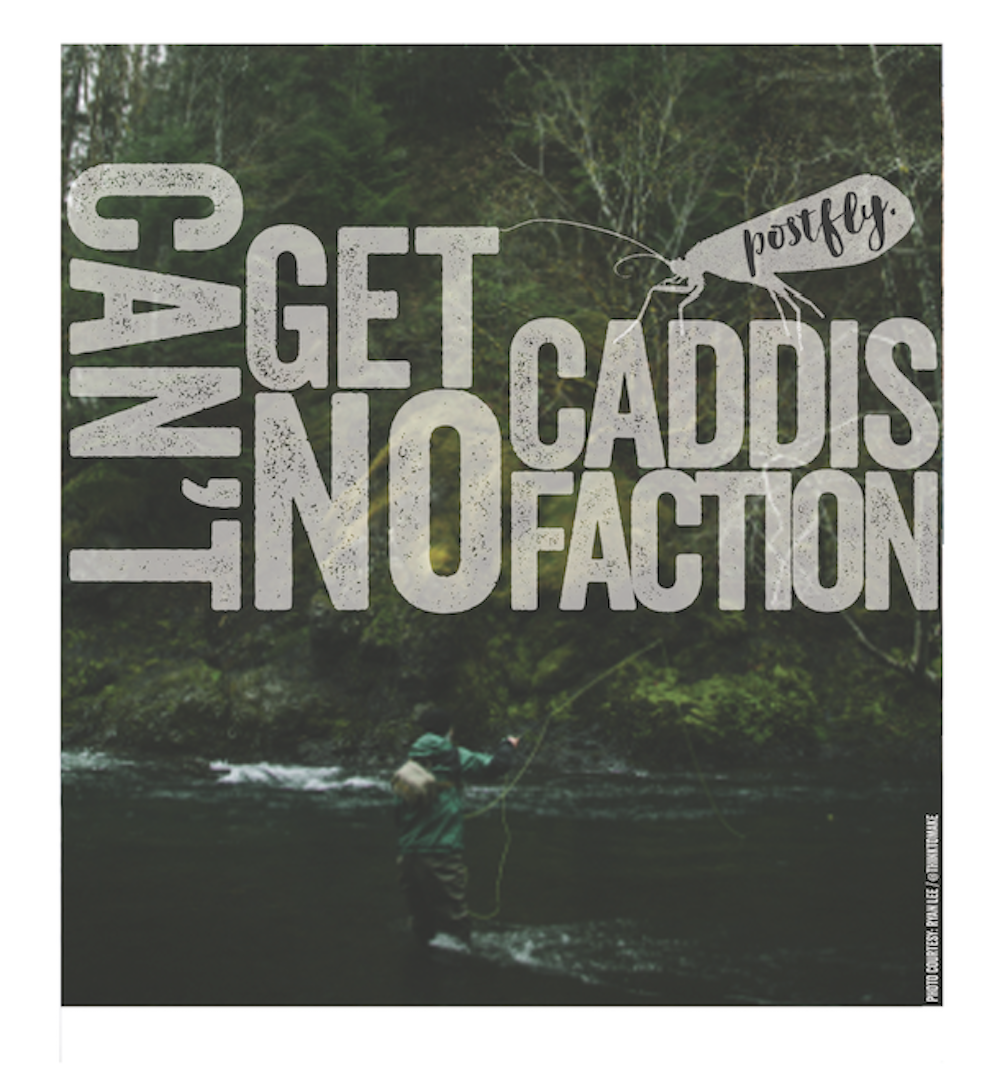 The chill in the air is starting to overtake the whole day, but that’s alright because we’re breaking out the waders, the whiskey and the nymphs and we’re going to keep on fishing all year long. The September Postfly boxes have arrived in the mailboxes of anglers all over the world and the fishing has already started to heat up this season. Are you getting in on the action?

Just in time for the Fall hatches, Postfly’s trout boxes this month feature the life cycle of the Caddisfly, a staple of trout everywhere. Whether you need to fool finicky fish with a small nymph like the Hotwire Caddis, or look for cruising giants that are ready to slash at a big bug like the YakCaddis, this box has everything you need to hook up this Fall.

You may have noticed a slight difference in the size of the insert this month. It’s bigger and badder than ever, and one of the coolest new slots that we’ll keep tweaking and making cooler is the monthly centerfold. Post this sucker up on your office wall and spend your work day dreaming of getting out there instead of being stuck behind the keyboard.

Another new section we’ll include in most of the new inserts will be the Pro Tip column, featuring some expert advice from our Postfly Tribe Ambassadors. This month’s tip comes from Postfly Ambassador Maddie Filomeo. What’s the first fly you should try throwing for steelhead when you’re not sure what they’ll bite? A black and blue intruder.

No matter what species you’re throwing to in the salt, there’s a really good chance that they’ll hungrily chase down a crab pattern. From redfish to permit to striped bass, all of our favorite saltwater species are happy to eat a crab, so September’s box features the best crab patterns that you can find. No matter if the situation calls for a high-vis attractor crab like the Silli Leggs Crab or a more subtle, natural pattern like the famed Merkin Crab, these patterns will do the trick.

Have you started tying up new patterns with this month’s Postfly Fly Tying box? Post photos of your coolest tie using this month’s box with the hashtag #postflymonthlytie and you’ll be entered to win a swag bag of Postfly gear. The coolest pattern wins. Do you have what it takes to be named Top Bobbin?

The Postfly Dare is the newest way for you to win cool gear. Post photos of the smallest trout you’ve ever caught and the most beautiful, tiniest fish will win that angler a prize pack of Postfly gear. They say size doesn’t matter, but who are they kidding, of course it matters. Small is mighty.

Now that the monthly insert is bigger than ever we’ll be able to feature more how to tips and full articles from our Postfly Ambassador team and our in-house experts to help you catch more fish. What’s more important than learning to tie better knots? The better your knots, the more you’ll be able to land fish and get the chance to post your badass fish photo and brag to the world. Isn’t that what this is all about?

Featured in our Trout box this month, the Hotwire Caddis is so effective at nailing big Fall trout that we’ve also featured it in our Fly Tying box this month. Learn to tie the super effective pattern here, or watch the how to video right now and start whipping up these deadly nymphs.

No matter what species is swimming around in your local warm water spot, the selection of flies in this month’s warm water box is going to fool a big one. If there are perch in your local fishery, throw the perch imitation and you’re sure to land something hungry. If you need a little more finesse in your approach, the Gorilla Damsel is going to trick fish into slurping down the big dragonfly imitation with wild abandon.

Tired of missing out on the coolest thing in fly fishing? Subscribe to Postfly now and start getting the best flies and gear sent right to your door every month and Join The Tribe of thousands of other anglers just like you.