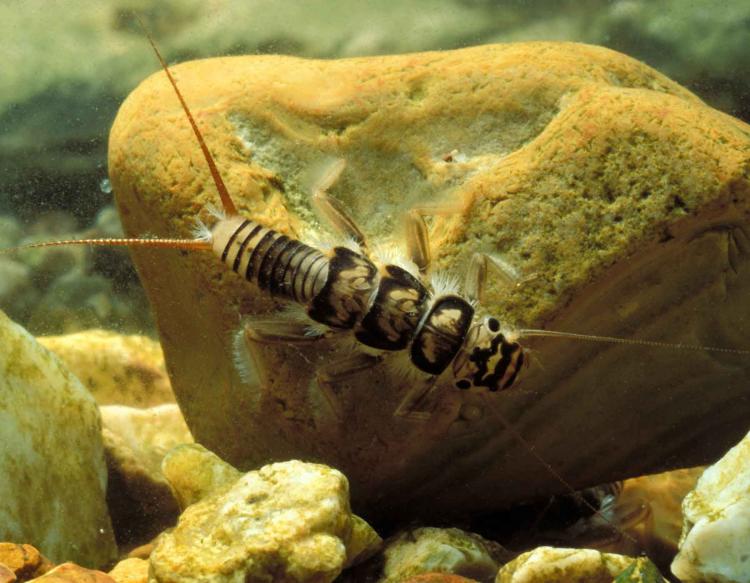 How well do you know your nymphs?

There’s an old fly shop mantra out there “Trout feed 85% below the surface” now we’re not sure the math is accurate, but it’s certainly advantageous to be able to quickly and easily identify nymphs, so you can match the hatch. Not only is it a cool feeling to be able to flip over a rock and go “I know what they’re eating”, but it can also be the difference between a slow day of fishing and a fish-after-fish day. So we’ve gathered a list of the most common nymph species that fly anglers imitate so you’re able to identify them yourself and get the right flies down to that big trout of the summer.

Stoneflies and their many variants are common in almost every stream that holds trout because they need cold, well-oxygenated, fast-flowing water to survive. They are found in those streams almost year round, as they spend months in their nymph form. You’ll typically find them crawling on the bottom of river rocks (like in the top image) and in the shallows as they make their migration from the stream bed to the bank to hatch. Easy to identify by their 2 long stiff tails, segmented bodies, and 6 long legs on the sides of their bodies.

Caddis are small almost worm-like nymphs that can be found commonly in many streams, but they truly thrive in cold, clean trout waters. They use their tail to adhere to the bottom and use their 2 front arms and mouthparts to filter out food. Some species of caddis build a case made of small gravel and debris they find along the bottom as a form of protection. These cases look like small tubes of gravel, sometimes with a green caddis head poking out of the top. Typically the caddis bite picks up as these nymphs become more active in early spring as air temps rise, and caddis patterns become a go-to for us all Spring, Summer, and Fall.

Some of the most prevalent nymphs in any trout system. typically much smaller than their stonefly and caddis compatriots, they swim about in slower currents and cling to rocks in the current filtering out food before they begin their journey to the surface to hatch. They’re easy to tell apart from stoneflies because of their multiple tails and less segmented bodies.

Scuds are mainly prevalent in creeks with lots of vegetation. These small aquatic shrimp, spend their days crawling around the vegetation eating whatever they filter out. I really start to look for scuds in creeks that are spring fed, as scuds need very clean and cold water to survive. To figure out if scuds are in your waters, I recommend pulling up a chunk of aquatic vegetation and seeing if you find any of these little guys crawling around.

While the hardest to identify right off the bat, midges are some of most common nymph species in any form of cold, trout water. They use the fine hairs on their head to form air bubbles which bring them to the surface to hatch. Typically you can see them wriggling near the surface as they struggle to the surface to hatch in still water. If you are fishing a creek, look for them in the eddies and slow sections of current.

Dan Zazworsky’s passion is sharing his love of fly fishing with anyone that will listen, read or watch. You can find him exploring new waters every day while chasing any fish that will eat a fly!

7 thoughts on “Nymphs Every Angler Should Know On Sight”