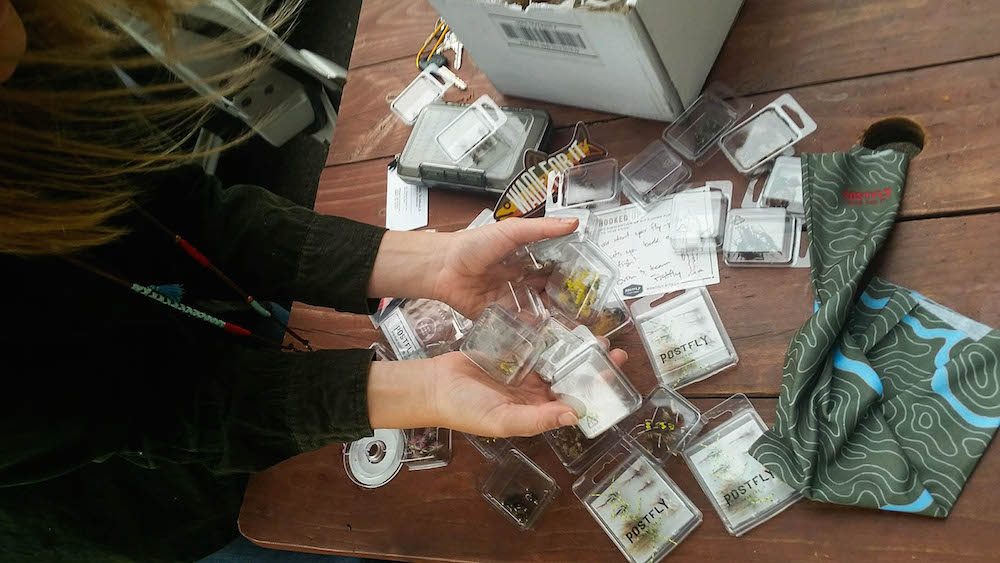 It takes time to gather up the right selection of gear that you can depend on. That gear not only becomes a tool that you use on the water every single time, but it eventually becomes a part of your personality. I cast the way I cast because of the rods I use and the ones I grew up using. Look at any fishing photo of me in the last decade and there’s an 85% chance that I’m wearing my trusted Simms Guide jacket. Every time my other half sees it she knows I’m going fishing and she rolls her eyes a little. Apparently it “looks funny.” I don’t know what she’s talking about.

When your gear breaks and needs to be replaced, that sucks. When it gets lost, that hurts a little. If they were stolen from you, well, that’s like taking a part of who you are. Many of you may remember a while back when we received a letter from the fly fishing club The Roving Dears, tipping us off to a little problem. One of their members, Laura Lothrop, had all of her fly fishing gear stolen and she was more than just a little heartbroken. Of course we couldn’t let that monster win, so we sent Lothrop a whole box full of flies, gear and swag to get her back on the water ASAP. (Read the original blog post about that here).

Since then Lothrop and the rest of The Roving Dears crew has been working hard to get caught up with their fly fishing season and making sure the little blip didn’t get their year off track. Of course, we wanted to make sure she had everything she needed and it turns out our little gift made her even more obsessed with fly fishing than before. That’s the best news we’ve heard all week.

“My fly-jacking was a big shock and I thought it was the end of fly fishing for a while, at least until I could scrape together some new gear,” said Lothrop. “The immediate response from the fly fishing community made sure I didn’t miss a bite.”

With fresh flies in her flybox (and a new flybox to put them in) Lothrop spent the summer exploring the small creeks and lakes of Oregon, Washington and Idaho. “The hunt for perfect pocket water has been an ongoing theme this summer and the dry fly action has been so sweet,” she said. “If I wasn’t out on the water, my two fishing buddies kept me honest and got me out there.”

While we’re happy to pat our own backs, we’re not the only company that came out of the woodwork to help. Tom Brodhead of 406 Fly Lines also sent The Roving Dears a little swag bag of their own, including four different lines, a hat and a line cleaner. “I’m sure the robbery was a really depressing event and my wife, Alexis, and I wanted to let her know that someone cared,” said Brodhead. “Alexis and I are both retired and we wanted the business to reflect our own personal philosophy of how to run a business which is treat people fairly, provide a quality product, and give back when we can.”

“Losing the gear was so sickening; all those hand-tied flies by friends, a handmade net from my dad, the rod and reel–all gone,” said Lothrop. “If there was ever a universal medicine, it’s kindness. My stolen gear has been a blessing in disguise; the people I have connected with didn’t even blink to help me out.”

“[Postfly’s] generous box of goods allowed me to fill my new fly boxes to the brim and Tom and Alexis from 406 Fly Lines sent me several fly lines to outfit my rod.” For the rod to put the line on, Lothrop’s boss, an avid fly angler, gave her a starter rod the next day so she wouldn’t miss the summer season. “My brother has been tying like mad, gearing me up with a new arsenal of woolly buggers, and my dad has even been re-building the handmade net that went missing,” she said. The Roving Dea’s Kd and Rebecca finished out the outfit, handing over tippet, snippers, indicators, and broken down boots without question.

“I grew up with fishermen so I always knew it was filled with dedicated people, but I don’t think I ever saw it as my community or something I would ever find myself engulfed in,” said Lothrop. This giant, awesome group of crazed anglers chasing big fish on the fly? Lothrop is right, we’re all just one big happy family. Why do you think I’m in this industry and not into golf. “I didn’t think the fly fishing world was my community before, but this experience has brought me deep into the fold,” Lothrop said. “They have shown me that it’s not about competition, but instead passion and camaraderie–it’s a wonderful group of people.”

Now that she’s had a taste for being a part of something bigger, Lothrop is taking her new connections and passion for the sport and reaching out to new anglers. Along with The Roving Dear crew, Lothrop has partnered with the Coastal Cutthroat Coalition to not only gather data for them in the future, but to also bring anglers together. “We hope to conscientiously lead by example, in our own imperfect attempts, to inspire other novices to get out and try,” said Lothrop. “We heard about the Coastal Cutthroat Coalition (CCC) and we knew we had to help. They’re collecting data on these elusive, but important fish, and we are working with them to assist in spreading the word and awareness of this research-based project.”

To bring anglers together and help spread the word about the CCC, The Roving Dears is hosting a Fly Swap on September 15th in Portland at Burnside Brewing Co. “Gathering people together is something we love to do, so naturally we thought of hosting an event to benefit the CCC and bring our local fishing community together,” said Lothrop. “With the support of Native Fish Society and several community leaders we’re hosting a conversation about coastal cutthroat, the role of the Coalition and the road ahead.” A portion of the bar’s proceeds from the event will be donated to to CCC and The Roving Dears will also be hosting a raffle of prizes to raise even more for the cause.

“Most of all we hope to see this event as a place to build community and stewardship, getting people excited and raising a glass to this wild and native fish!” said Lothrop. “This is our first big shindig, but we know this is just the beginning.” When asked about her fly of choice to toss into the Fly Swap pile, Lothrop said, “I’d share with you what fly I’ll be swapping, but I only know it as ‘The Big Nasty,'” she said. “It’s a magnet.”

Want to make sure that you have a fresh supply of flies even if some loser comes along and steals your stuff? Get a new box of flies, gear and swag delivered to your door every month and Join The Postfly Tribe now.